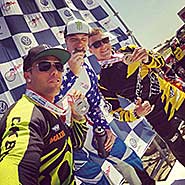 Researchers at UC San Diego School of Medicine who have been working with Olympic BMX cyclists to improve their athletic prowess have documented areas of the brain that appear to respond to mindfulness training. Specifically, recent results suggest that these peak performers were better able to appropriately anticipate challenges and found that they could remain focused and aware of their performance in the midst of the split-second stressors that arise in a BMX race that can be intense and often lasts for fewer than two minutes with multiple competitors vying for a place at the finish line. These results suggest that BMX performance may be enhanced through the regular practice of mindfulness meditation.

As measured by fMRI activity in the anterior cingulate cortex (ACC) and insula were enhanced during the anticipatory and recovery phases of a stress-provoking exercise. The ACC and insula are believed to play a strong role in interoception, the ability to sense bodily sensations such a heart rate and integrate them with external stimulation and emotional overlay.

“Prior to the test, their brains were ramping up for activity,” said first author Lori Haase, Assistant Clinical Professor of Psychiatry, UC San Diego School of Medicine. “We interpret this as meaning the athletes are anticipating the stress and getting ready for it.”

The second measurable change was an apparent reduction in the level of connectivity between posterior cingulate cortex (PCC) and both the right medial frontal cortex and ACC, during the stress-evoking test, in which athletes were asked to breathe through a narrow straw that restricted air flow. The PCC is implicated in self-awareness and self-referential thoughts. A reduction in connectivity to this brain area is consistent with the idea that mindfulness training heightens a person’s awareness of bodily sensations, with less self-referential processing added to what is being experienced physically. “This can potentially help athlete stay present to their performance ,” Haase said.

Taken together, these results suggest that significant changes in the brain, directly related to performance in intense and physically demanding activities like BMX cycling or other athletic endeavors, can result from a relatively brief and focused program like the UC San Diego Center for Mindfulness’ mPEAK course.

Lori Haase is a Licensed Clinical Psychologist and in addition to her clinical training, she is also a neuroscientist investigating the neural substrates of resilience and optimal performance and their modification through mindfulness training. Dr. Haase is Director, co-developer, and teacher of the Mindful Performance Enhancement, Awareness and Knowledge (mPEAK) program.​