Mindfulness and Yoga: Complementary Paths of Health, Healing, and Wellbeing 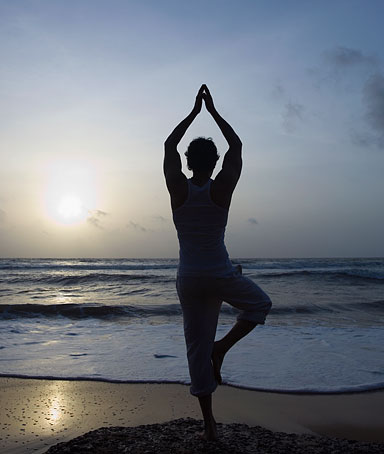 As I’ve been teaching various forms of contemplative practice over the past dozen years or so in different settings with a wide variety of groups, I have observed that people who practice “yoga” do not always have a sitting meditation practice, and that people who meditate do not always have a contemplative-oriented movement practice. This trend seems to reflect a wider societal phenomenon evident in a number of fields, notable philosophy, psychology, and medicine, over the past few hundred years to separate the realms of mind and body. Thus, one feature of the mindfulness-based stress reduction (MBSR) program, and other mindfulness-based programs, that strikes me as particularly powerful is the blending of both of these approaches to self-development within the same course offering. In my experience, these two approaches – sitting meditation and mindful movement -- are intimately tied to one another, and, when practiced together in a complementary way, inevitably deepen one’s practice.

Mindfulness is often conceived of as a moment-to-moment practice of non-judgmentally paying attention to one’s experience, a practice that is cultivated both formally through specific techniques, such as sitting meditation, and informally as one moves through daily life. In this sense, mindfulness has developed over the past half-century or so as a means of experiencing many of the psychological benefits of meditation without necessitating adoption, or even consideration, of specific spiritual, philosophical, or religious beliefs. Thus, although mindfulness grows out of the Buddhist stream of contemplative practice (Maex, 2011), mindfulness as it is practiced today offers a secular pathway for working with the mind and body.

Interestingly, the notion of “mindfulness” is also evoked to refer to a specific mindfulness program. Mindfulness-Based Stress Reduction (MBSR) is a systematic approach to teaching mind-body awareness and growth that was founded by Jon Kabat-Zinn over 30 years ago when others teachers of contemplative paths were also practicing and teaching mindfulness, meditation, and yoga (Kabat-Zinn, 1990). Included in the program of sitting meditation, attention to the breath and thoughts, and body awareness, is a “yoga” practice that resembles the type of practice offered in most yoga studies. This combined approach of MBSR and other mindfulness-based programs (Cullen, M. 2011) has been particularly useful as a means of integrating mindfulness into the therapeutic contexts of medicine, clinical psychology, and healthcare in general.

In a parallel fashion, the practice of “yoga” has also made its way into therapeutic, clinical, and healthcare contexts both on its own as a method of reducing stress and bringing health to the body and mind, and within mindfulness-based program as a means of practicing mindfulness (Harrington, 2008). Distinct from the “mindfulness” milieu, “yoga” has become widely popular as a way of achieving health, fitness, and vigor (Alter, 2004). In this sense, for many people today “yoga” means a physical movement oriented practice of various postures, perhaps also with awareness of the breath and some deeper connection of the body with the mind and other aspects of our being, with benefits of greater flexibility, strength, and diminished stress and pain-related symptoms.

However, in the ancient tradition of yoga, and, in fact, in many non-mainstream circles today, meditation is the ground of yoga. For thousands of years, even predating the era of Classical Yoga (c. 150-200A.D.), the practice of “yoga” centered on meditative practices as the means for uniting the practitioner with the greater reality (Feuerstein, 1998). One important feature of yoga, though, is the fact that it adapts to culture, historical era, etc. Thus, the system of strong physical postures and breathing techniques that we know as “yoga” today actually emerged rather late in the history of yoga, in the 13-15th centuries, and is more accurately identified as “hatha yoga” (White, 1996). This physical and body oriented method of practicing “yoga” (transformed once again from its medieval manifestation) is what has become a popular means of pursuing health and strength of the body and mind today (Alter, 2004; DeMichelis, 2004; Harrington, 2008), whether on its own or as part of a mindfulness program.

No matter one’s entry point into contemplative practice, whether it be through the physical or the mental, I invite us to consider that these two streams of practice are not separate. Rather, these are complementary means to awareness, health, and wellbeing. Mindfulness helps deepen the process of self-inquiry during physical practice, a lesson that can then be taken off the mat when we move around in life. Similarly, a regular contemplative movement – hatha yoga if you prefer the more traditional name, or simply “yoga,” – supports a sitting meditation practice. Meditators often encounter problems such as pain in the knees and back from sitting for extended periods of time; yet, when a regular “yoga” practice is undertaken, the body becomes transformed in such a way as to allow it to remain comfortably at rest for longer and longer periods of time in a single posture that supports a state of restful awareness experienced in the mind, as well. The effects of systematically practicing yoga take root in the body, transforming it on a day-to-day basis. Together, contemplative sitting and movement practices bring more ease and free practitioners from preoccupation with the pains and limitations that we may normally experience in our body-mind, thus cultivating greater wisdom and wholeness in daily life.

So how can we make sense of the observation that different people naturally gravitate towards different types of practice? It is not so difficult to recognize that we each have unique constitutions.  Some people are more introspective by nature, while others are more action and physically oriented. So sitting and practicing meditation may be a more natural behavior for those of the more introspective constitution, while engaging in physical postures, sometimes often quite challenging movements, may offer more appeal for others.

Yet in common between all constitutions is the basic reality of the intimate connectedness of body and mind. This insight is especially relevant when we consider the possibility that the “body” is not merely, or just, “physical” as it in common understandings of the body.  Embedded within the body lies our nervous system, the physical and energetic reality of our minds. Thus, in this sense, the mind resides within the body as a continuous ever-present system that is fully interactive with the rest of the body. In this view, cognitive processes, such as attention, thinking, and problem solving, and emotions as well, are embodied and deeply rooted in the body’s interactions with the world (Varela, et al., 2009). This embodied mind orientation provides an increasingly popular theoretical stance for a holistic view of human nature that the two – body and mind - are not separate.

What does this mean for practice? The practical insight here is to spend at least some time each day on the different types of contemplative practice, both sitting and movement, because each mode of practice supports, complements, and reinforces the other. By exercising the literal muscles of the physical body, we simultaneously exercise the metaphorical muscles of the mind; and, conversely, by strengthening mental acuity and clarity through sitting practice, we also benefit the body. An integrative approach to lifestyle, behavior, and healing cultivates true health and wellbeing.

Amy Dr. Holte is a graduate of The University of Texas at Austin where she completed her doctoral research on meditation and the brain, drawing from both ancient texts and current research on the neuroscience of meditation and clinical effectiveness of yoga and meditation for health conditions. She teaches Mindfulness-Based Stress Reduction for the UC San Diego Center for Mindfulness. She also teaches mindfulness, yoga, and meditation to help people suffering from stress and stress-related conditions, including depression, anxiety, and chronic pain.