The Mindfulness Solution to Pain: Read The Story of Adam & MBCPM 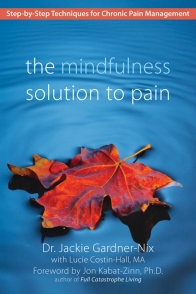 The Mindfulness-Based Chronic Pain Management (MBCPMTM) course is a modification of the Mindfulness-based Stress Reduction courses established by Jon Kabat-Zinn which are now world-wide. There are cognitive aspects to the MBCPMTM course, as well as carefully crafted meditations to speak more to the chronic pain sufferer than the general participant who signs up for mindfulness training.

In most Mindfulness program there is a curious ratio of 70 to 80% women to 20 to 30% men, yet men benefit very much from this work, and many of the leading teachers in Mindfulness are men. The following is a moving story emailed to me one year after taking our course by a young man, his site connecting with mine where I was co-facilitating the course via telemedicine in Ontario, Canada. At his site sat a young, softly spoken neurologist, doing her first co-facilitation via telemedicine with me after training in our curriculum, before launching her own courses. He repeated the course to gain more training in mindfulness, joining her for her first solo course.

My chronic pain odyssey began in early 2012. It was based in my bladder and was from an inflammatory condition called Interstitial Cystitis (IC). I also later developed chronic neuropathic pain. The pain was debilitating, relentless and as it persisted and intensified, it completely broke me down. It ruled my life. As a result, my marriage ended. I was unable to work. I fell into a major depression. I was 37 and doubted I would make it to 40.

After seeing nearly 20 specialists, I was referred to Dr. Jackie Gardner-Nix’s Mindfulness Based Chronic Pain Management (MBCPMTM) class in the summer of 2014. While initially shy and quiet, as I started to speak with classmates, I felt understood for the first time in years, even validated. Finally, there were people who could relate to me and my suffering. And a doctor who actually ‘got it!’ As I read sections of Dr. Jackie’s book, The Mindfulness Solution to Pain, it was like reading my biography. Some case studies in the book were people just like me – similar personality traits, pain triggers and emotional responses to pain.

Over time, the book, classes, activities, guided imagery and meditation collectively led to something transformative happening; my attitudes and views started to change. I began to realize that my emotions, especially bitterness and hopelessness, impacted my pain in a negative way. I began to gradually accept the pain and let it be. I started to focus my thoughts on the positive things in my life. For example, I had written a manuscript for a children’s book and I started to explore publishing it. And I went to my GP to get referred to a urologist in Kingston, Ont., who was Canada’s leading authority on IC.

I met with the urologist. I went into that consult with a positive, hopeful attitude. I can say emphatically that MBCPMTM contributed significantly to me being positive during the doctor visit. Everything I learned from MBCPMTM helped arm me with the courage to follow the urologist’s treatment regimen, which included invasive and painful bladder instillations - a treatment I had feared tremendously. Within a few months, my symptoms started to improve considerably.

I participated in a second round of MBCPMTM led by another doctor who was trained by Dr. Jackie. By March, I returned part-time to my job and dedicated the rest of my time and strength to the arduous process of self-publishing a book. In September, the book was printed and I started to do readings and author visits at schools. Children literally mob me like a rock star when I read. They laugh and learn and I glow in knowing my creation brings them such joy. In October, I hosted a book launch party with over 100 people. An article about the book and the pain I managed well enough to produce it, was published in a local paper.

I continue to take most of the medications prescribed by the urologist, but I no longer require the invasive treatment. I still experience neuropathy, but it has no impact on my mood. My thoughts, views and attitudes are bursting with hope and optimism. MBCPMTM enabled me to really understand the mind-body connection. It helped me cultivate a frame of mind in which I control my life, not pain. I am mindful every day of how far along I have come and how happy I am to live in the here and now. And that gives me strength to live a fulfilling life.

Christy Cassisa is a former attorney, who is the Director of WorkLife Integration for the UC San Diego Center for Mindfulness. As she notes, “With all of the excitement surrounding mindfulness in the business community, we are thrilled to offer our WorkLife Integration Programs and our new Mindful Leadership course in partnership with UC San Diego Rady School of Management, Center for Executive Development. Now you can bring the Center’s expertise to your office with a program or workshop tailored for your business or group.” If you have an interest in learning more, contact Christy via the Center for Mindfulness at cfmworklife.ucsd.edu.