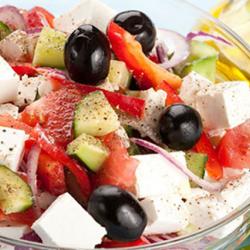 Diets fall in and out of favor, but the Mediterranean diet has stood the test of time. Decades of research have shown that a plant-based mix, including vegetables, fruit, legumes, olive oil, fish and whole grains, can improve or prevent many chronic diseases, including heart disease, type 2 diabetes and arthritis.

Scientists trace the diet’s benefits in part to its positive effect on the microbiome — the rich ecosystem of microbes, or microorganisms, that inhabit our bodies, especially the gut.

What you eat can encourage or inhibit the growth of certain types of gut bacteria, increase or decrease overall diversity and influence metabolites the microbes produce, which are key players in activating inflammation. An unhealthy microbiome — one that’s less diverse and unbalanced — is associated with autoimmune diseases like rheumatoid arthritis (RA) in susceptible people.

“We know the Mediterranean diet is good for patients with rheumatoid arthritis,” says Monica Guma, MD, a rheumatologist and researcher at the University of California, San Diego. “But there also might be something better.” That something is what she calls the ITIS diet. It’s the Mediterranean diet supercharged with anti-inflammatory foods and herbs that may improve gut health and arthritis symptoms.

She and her colleagues spent a year designing the diet. At four different stages, they consulted patients to make sure the diet was affordable and was one they could stick with for the two-week study period. They made a few changes as needed.

The diet includes a lot of things the standard Mediterranean doesn’t, including:

It also excludes some things the Mediterranean diet allows:

Red meat, sugar, soda and processed or fast foods are out of bounds in both the Mediterranean and ITIS diets.

Twenty-two highly motivated patients with doctor-diagnosed RA followed the ITIS diet for two weeks. They continued taking prescribed medications during the study. Half experienced a 50% improvement in pain and swelling as well as in subjective measures such as fatigue, often in three or four days. A few patients went into complete remission.

“They got better really quickly,” Dr. Guma says........read the entire article at The Arthritis Foundation by clicking the link above.

New on UCSD-TV: The Magic of Mushrooms: Revolutionizing the Future of Food, Farming and Medicine

The Benefits of Online (virtual) Retreats

Informed without Being Overwhelmed in COVID-19

Online ATTI: Growing Into the Heart of Teaching MBSR-Dharma, Embodiment and the Refinement of Intention